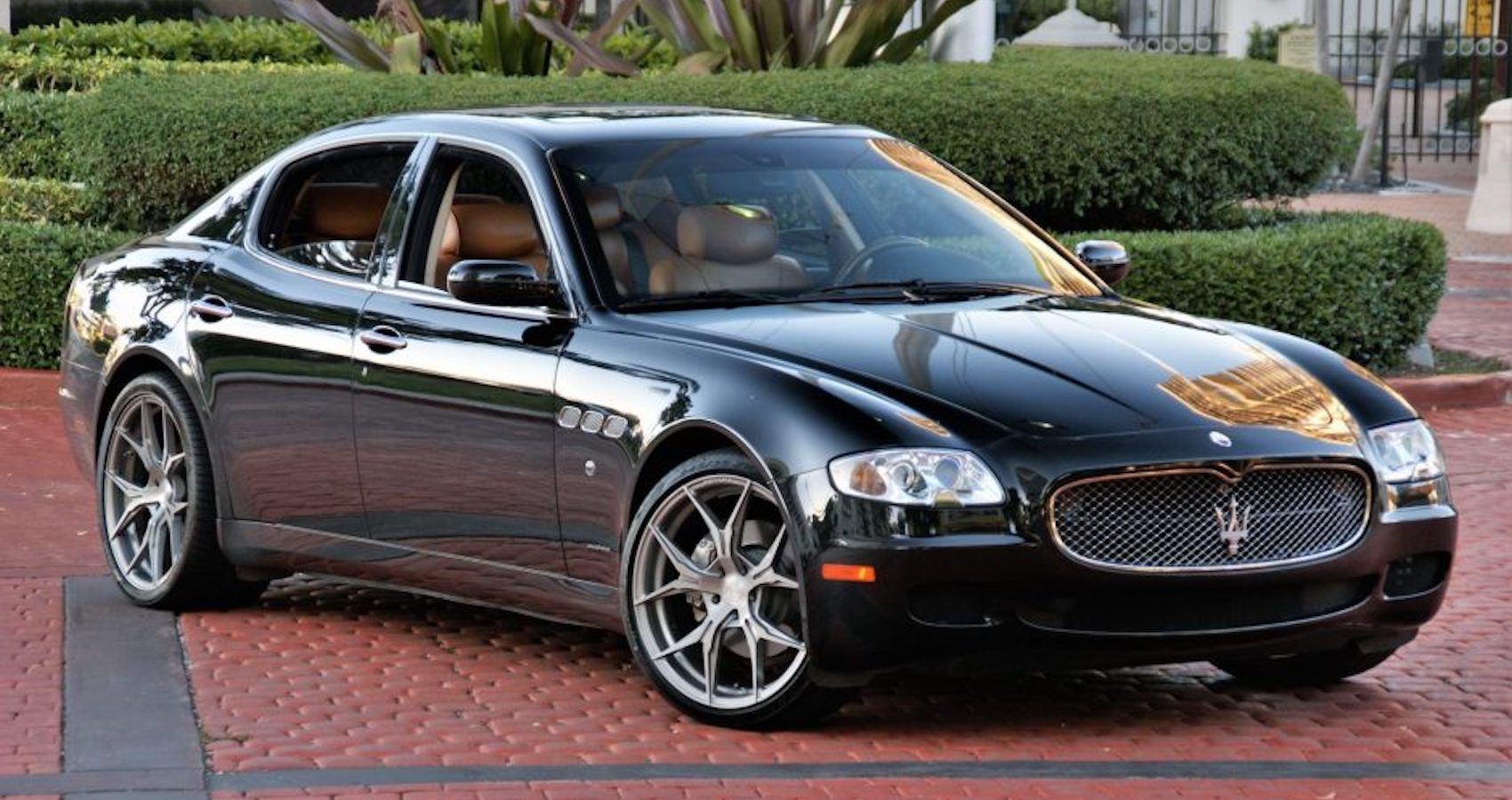 Most cars on the road are driven by people who just want to get from point A to point B and don’t particularly care what they do with it. Some wealthier people do it too, but they usually do in a more luxurious carrather than a crummy hatchback or plastic sedan.

luxury cars just add that little extra feel to the trip – usually by removing road feel. They have more features and technology to entertain their occupants and offer more comfortable seats and a more refined ride, to make long distances feel like a trip to the shops. More luxury cars are excellent and are becoming relatively popular among the car-buying community, however, some simply don’t make it, for a variety of reasons.

So, to help any potential luxury car shopper get it right, here are 5 luxury cars we’d happily buy used, including 5 we’d avoid as far as humanly possible.

The BMW 7 Series is the premium luxury car from the Munich brand and is currently in its sixth generation. The 7 Series has always been the main rival of the Mercedes-Benz S-Class but has never really been able to top it in sheer luxury. BMW knew this, so the company decided to make the 7 Series the sportier of the two, resulting in an impressive blend of comfort and performance to scare off some supercars.

Each generation of the 7 series is a good choice when looking for a luxury houseboat, but it would be advisable to avoid the E65 generation, as it may have mechanical and electrical problems, which may very well cost more to repair than the use value of the car itself. The 7 Series E38 is the best looking of the lot, with classic BMW styling and a design that doesn’t look old at all.

Related: Here’s Why The BMW E38 7 Series Is Now A Luxury Affair

Like the BMW 7 Series, the Audi A8 is their largest and most luxurious sedan that rivals the Mercedes-Benz S-Class. In its earlier history, the A8 struggled to compete with either of its German executive sedans, however, the last two generations have shown it to be just as good and in some cases even better.

The top-of-the-line version of the S8 is the sportiest version of the A8, which usually featured the engine from the RS6. The A8 was also equipped with the W12 from the VW Phaeton, and even had an atmospheric V10 in the D3 generation. The A8 is definitely one of the best luxury cars on the used-car market thanks to its ridiculous depreciation rate, which currently sits at 62% over five years.

The Genesis G90 is a relatively new entry into the large executive sedan market, but it certainly made an impact with its build quality, standard features, and performance. The G90 appeared in 2015 looking mostly like a big Hyundai sedan, but everyone took notice with the 2018 facelift, which drastically improved the styling and introduced the new Genesis design language to the model.

The Lexus LS has been around since 1989 when the original LS400 was launched. The LS may not be the most exciting executive sedan in the world, but it is the most reliable. The LS is also available as a hybrid in most model generations or with a V8. The fourth generation even featured a V8 hybrid drivetrain that produced 440 hp.

The LS is a very reliable car that will take a potential owner wherever they want to go in smooth, leathery comfort and won’t break the bank – if the car is a hybrid. Opting for a Lexus LS is also a bold choice that will help you stand out from the rest of the crowd with their Mercs, BMWs and Audis.

The Rolls-Royce Phantom can be a bold choice for a list like this. After all, it costs used what most other cars cost new. But then again, the Phantom is the absolute pinnacle of luxury, the epitome of comfort, the only automobile to put all others to shame.

The Phantom also has the options and customization to justify its claim to the throne, with an unbeatably smooth 6.75-litre twin-turbo V12 and more leather than found on an Australian beef farm. Granted, the maintenance costs of a Phantom can be a bit higher, but then again, owning the most luxurious and comfortable car out there makes up for that.

The Maserati Quattroporte as a whole is an incredible car. The first generation of the modern Quattroporte still boasts the best sounding V8 engine ever put into production, with its throaty roar that echoes through the bones. The Quattroporte models after it are still good, but they don’t quite have the same spirit as their predecessor.

While the Quattroporte can be a tempting option as it currently costs as little as $20,000, early models had one huge flaw. When the Quattroporte was reintroduced, Maserati fitted it with the same transmission used by Ferrari, specifically the F1 renamed transmission in DuoSelect, which did not work properly when driving slowly. Fortunately, three years after the car was launched, Maserati replaced the gearbox with a standard torque converter automatic and 80% of the car’s problems were solved. Still, the remaining 20% ​​can be quite expensive.

The Mercedes-Benz S-Class is the pinnacle of relatively accessible luxury, surpassing the likes of the BMW 7 Series and Audi A8. It was, still is and probably always will be the first choice of large executive lounge. Unfortunately, maintenance costs can quickly reach ridiculous amounts when things go wrong after the service plan and factory warranty expire.

As with most Mercedes models, the electronics are quite complex and expensive to replace as the S-Class is the most technologically advanced car in Mercedes’ range – apart from the EQS. For that reason, we’d stay away from a used S-Class and instead opt for one of its rivals, which are slightly cheaper to maintain.

The Porsche Panamera is a good car, but ugly. The current Panamera solved the looks problem and significantly improved the overall design of the car, with the Sport Turismo being the cooler version. However, the first generation Panamera has many other factors that influence its purchase on the used market.

The engines are great and the Turbo S has a twin-turbo V8, but Porsche has made the car cold and clinical. It’s extremely fast and impressive for what it is, but it just doesn’t produce happy chemicals – like most German car offerings of recent years.

The Jaguar XJ is quite simply one of the coolest British cars in motoring history. The design of the car was both restrained and immediately noticeable. It would be right at home as a head of state’s official car or as a cruiser for an organized crime boss. For the 2010 model year, an all-new XJ was introduced which took the luxury sedan segment by storm.

A popular British motor show loved the new XJ so much they created an award just for it. The problem with the XJ was that it was built by Jaguar Land Rover, a company that doesn’t have the best reliability record. As such, used XJ prices dropped to such an extent that a very well-equipped car could be had for as little as $30,000 – for a car that started at around $80,000.

The Range Rover Vogue is one of the most versatile vehicles currently on sale, functioning as a luxurious limo, sophisticated off-roader, sidewalk cruiser and practical family SUV – all in the same package. Interestingly enough, Land Rover has somehow retained its reputation for questionable build quality and reliability – odd for a carmaker that makes great cars.

These reliability issues were so severe that Land Rover even temporarily halted production of its new Defender to address some of these issues. There are also many articles relating to the Range Rover and never buying one without an extended factory warranty or aftermarket warranty. Doug DeMuro even commented on his experiences with a Range Rover and how much his third-party warranty saved him. This is definitely a car company to avoid when looking to buy used.

The most luxurious cars you’ve never heard of

Michael De Kock is passionate about cars and everything from lawyers to particle accelerators. He studied psychology and knows a little about repairing cars (especially old Land Rovers). He also blogs and has a book, 125 Creative Writing Prompts for Petrolheads, available on Amazon. His philosophy in life: Stop Hate – Adopt a V8.

These cheap luxury cars will ruin you with repairs