Last week, reports surfaced that as poverty ravaged South Africa, seven children had died of starvation in the Eastern Cape. This loss of innocent lives is a tragic confirmation of how hunger, poverty and unprecedented hardship have plagued millions of South Africans over the past three years. The devastation wrought by destructive and often senseless lockdowns, combined with soaring fuel and food prices caused by the chronic corruption and mismanagement of President Cyril Ramaphosa’s cabinet, has trapped more citizens in poverty, hunger and unemployment than ever before in the history of South Africa. 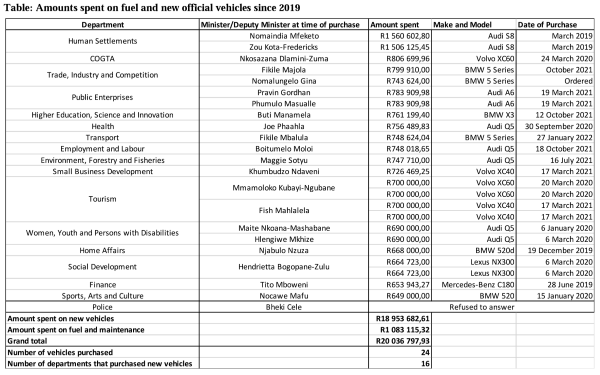 Last week, Statistics South Africa reported that the annual inflation rate on staple foods like bread and maize meal more than doubled in January, while the Reserve Bank hiked interest rates an additional 25 basis points for fear that inflation will escalate. control. Statistics South Africa also reported that the price paid by ordinary South Africans for transport rose by 14.3% year-on-year, with some economists predicting fuel prices could soon hit R40 a liter .

While every other citizen feels this pain every day at the taxi stand, at the gas pump and at the cash register, there is an elite class of South Africans who are exempt from the crisis of the cost of life facing our country: the very ANC cabinet that caused the poverty crisis in the first place.

The Democratic Alliance (DA) today reveals new information, obtained through a series of parliamentary questions, which shows that while most South Africans struggle to find a working train and can barely pay for taxi fares or refuel petrol or diesel, President Cyril Ramaphosa’s anti-poverty cabinet has spent more than R20 million of public funds on fuel and luxury vehicles nine for ANC Ministers and Deputy Ministers over the past three years. Many of these new vehicles also cost significantly more than the R700,000 spending limit nominally imposed by the November 2019 version of the Ministerial Handbook.

Under the terms of the handbook, every minister and MP receives a luxury vehicle to use in Pretoria and Cape Town, courtesy of the South African taxpayer. The cost of fuel, maintenance, tires and tolls for all these vehicles are also paid out of the pockets of the South African public.

Since 2019, the ANC’s anti-poverty cabinet has spent more than R1 million on fuel and maintenance for ministers’ and deputy ministers’ luxury official vehicles alone. This despite the fact that South Africa has been stuck for much of the past three years, with mobility severely restricted.

Since 2019, taxpayers have purchased 24 new vehicles for ministers and deputy ministers, at a total cost of almost R19 million. The average cost of the 24 vehicles purchased was R789,736 – well above the supposed limit set by the ministry manual. Ministers and former ministers, including Fikile Mbalula, Nkosazana Dlamini-Zuma, Pravin Gordhan, Tito Mboweni, Maite Nkoane-Mashabane, Joe Phaahla, Mmamoloko Kubayi-Ngubane and Khumbudzo Ndaveni, have all bought themselves flashy new wheels as poverty, hunger and hardship exploded. around them.

In the most staggering case of all, in March 2019 – more than a year into the Ramaphosa administration – the Department of Human Settlements paid over R3 million for the purchase of two Audi S8 supercars for the delight of former minister Nomaindia Mfeketo and his deputy at the time, Zou Kota-Fredericks. The dashing duo were fired soon after, however, and the vehicles were likely mainly used by Minister Lindiwe Sisulu and her deputy, Pam Tshwete, to speed traffic to the nearest luxury store.

Audi remains in pole position as the vehicle brand of choice for revved-up executives, with eight luxury models ranging from the S8 to the A6 and Q5 purchased for ANC petrolheads. Next come Volvo, with three XC60s and two XC40s, followed by BMW, Lexus and Mercedes-Benz, which complete the home stretch.

In eleven different cases, the amount of taxpayers’ money spent on luxury vehicles by ministers and deputy ministers exceeded the statutory limit of R700,000 imposed by the Ministerial Handbook. Although the Manual allows the finance minister to increase this limit, it would have been in place until at least November 2020 – and possibly longer.

Given that up to eleven vehicles were potentially purchased in violation of the R700,000 limit by prominent members of the poverty cabinet such as Fikile Mbalula, Nkosazana Dlamini-Zuma, Pravin Gordhan, Khumbudzo Ndaveni and Joe Phaahla, the DA is preparing to lodge a complaint with the Office of the Public Protector as soon as there is clarification on the incumbent’s impending suspension.

The Ministerial Manual also states that an official vehicle can only be replaced after 120,000 kilometers or five years, or if it “experiences serious mechanical problems and is in poor condition”. The DA will therefore endeavor to obtain all relevant records to expose all instances where vehicles have been replaced prematurely.

Finally, we reiterate our call on all South Africans to support our motion of no confidence in this disgraceful cabinet of poverty, which drives around in flashy supercars when South Africans can no longer afford to buy food or fuel, and children starve.