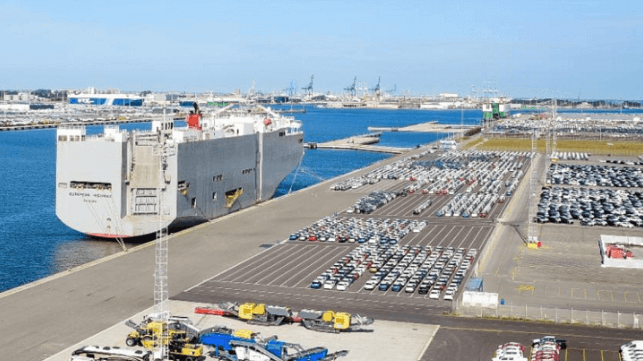 
The port of Zeebrugge – the busiest Ro-Ro port in the world – has encountered a problem with a small part of its roll-on cargo. Due to sanctions related to the invasion of Ukraine, luxury cars cannot be shipped to customers in Russia, and the Zeebrugge lot is starting to rack up in the thousands.

In an ordinary year, Zeebrugge processes thousands of EU-made cars destined for the Russian market, but this is no ordinary year. Since the imposition of the EU luxury export ban in mid-March, Zeebrugge has received around 8,000 luxury cars for trans-shipment to Russia, mostly from Asian sources. Even though these vehicles were not built in Europe, they are in Europe now, and therefore they are stuck in Belgium. There is no indication that they will soon travel to their intended destination.

“Customs said they have to be here and they are blocked. We don’t know how long they will stay. I guess we will look for alternative markets,” Marc Adriansens, director of the Zeebrugge car terminal told Euronews .

The luxury car ban is largely symbolic and has a limited impact on overall sales. European automakers are most directly affected, but even they are unlikely to feel the pinch, according to Bloomberg. The Russian car market is relatively small: before the invasion, the Russian economy was smaller than that of the US state of Texas, and it is expected to shrink by around 10% this year.

“Given a large backlog for all premium brands, I would expect any export losses to Russia to be redirected to other markets,” Bloomberg analyst Michael Dean said. Intelligence.

The ban on luxury cars is among dozens of sanctions imposed on Russian trade by the EU, UK, US, Canada and Japan. These include restrictions on financial transactions with most Russian banks, bans on doing business with some of Russia’s largest state-owned companies, and a wide range of sectoral sanctions on specific goods and services. Five of the six major shipping carriers have stopped serving Russian ports (except for humanitarian and food shipments), and Russian shipping is finding it increasingly difficult to obtain parts, insurance and access to ports.

So far, Europe has refrained from sanctioning Russian oil and gas, which plays a major role in financing the Russian government and Russian military operations. Last year, the Russian state earned $120 billion in revenue from its energy exports, nearly double its annual military budget.

Given that EU sanctions on Russian oil and gas shipments would have a huge impact, this could be the next step. However, this would be costly for the European economy – especially in Northern Europe, which is heavily dependent on Russian gas supplies.

“Cars are a problem, but as long as gas keeps flowing, I think Zeebrugge will be fine,” Adriansens told the Wall Street Journal. “But if these shipments from Russia stop, the port will be in trouble.”