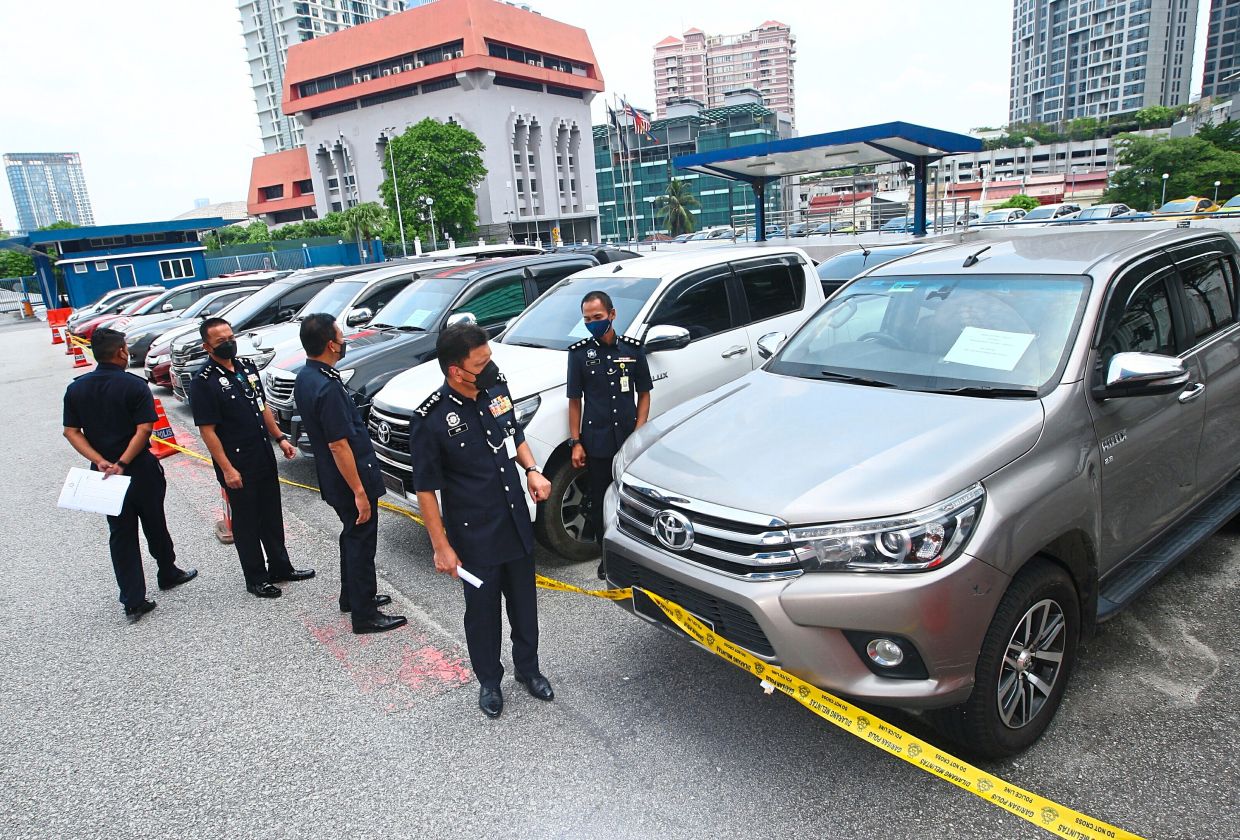 KUALA LUMPUR: A total of 26 stolen luxury vehicles worth around RM3 million have been seized following raids in several states.

Nine men aged between 30 and 40 were arrested in the operation dubbed Ops Lejang which was carried out from December last year to April this year.

“The syndicate would exchange details of stolen vehicles with those of vehicles that had been surrendered or declared as a total loss by insurance companies.

“Once the details are exchanged, the syndicate would register the stolen vehicles with the Department of Road Transport (JPJ) and Puspakom,” he told a press conference at KL Police Headquarters yesterday.

“Basically, the syndicate would ‘resurrect’ vehicles that had been declared a ‘total loss’ through the exchange,” he said.

Investigations revealed that the syndicate made profits of between RM30,000 and 40,000 for each vehicle sold, Comm Azmi said.

“We believe the union has been operating since December last year.

“The investigation is still ongoing and we are not ruling out the possibility of making further arrests,” he said.

On another subject, Comm Azmi said that the police will propose to the court a new study of the method of disposal and destruction of evidence, especially fireworks.

He said the study should be conducted to find a suitable method to dispose of the evidence.

“We will be looking for better methods of disposing of the evidence based on the report from the fire and rescue service.

“This must be done because it is not appropriate to dispose of certain case materials in a certain way, so an appropriate method must be identified,” he said.

He was commenting on Tuesday’s explosion at the Sentul police evidence repository.

“The disposal method at Sentul storage followed the instructions issued by the magistrate.

On Tuesday, three civilian staff were lightly injured following an explosion at the Sentul police warehouse.

Meanwhile, on another topic, Comm Azmi said that KL Police are ready to be deployed during the festive season to ensure public safety.

“Only 10% of the KL Police force are allowed to go on leave this festive season. Personnel from the Mobile Patrol Vehicle (MPV) unit and the Motorcycle Patrol Unit (URB) will reinforce patrols, especially in residential areas,” he said.